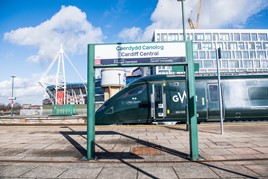 Inter-city trains serving Wales should be controlled by the Welsh Assembly Government, according to WAG Cabinet Secretary for Economy and Transport  Ken Skates.

Speaking last week, he said: “Earlier this year I called on the UK Government to allow the Welsh Government to take on responsibility for the franchising of inter-city services between Wales and the rest of the UK. Given the considerable benefits we have achieved, and the success of the process we have created, I would like to reiterate that call.”

Skates said: “Following the curtailed electrification of the Great Western Main Line, Cardiff to London journey times will at best be 1hr 45mins, the same as 30 years ago, and Swansea will still be 2hrs 45mins.

“Outside of the agreement to transfer the Valley Lines to us, we rely on the UK Government to provide funding for enhancements to the rail network in Wales, and I have already set out my expectations and overarching needs for the network.”