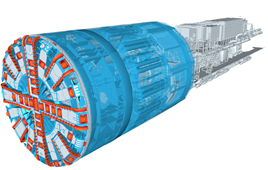 The public are being given the opportunity to name the first two tunnel boring machines (TBMs) to be used on HS2.

Three names have been suggested by local schoolchildren - Cecilia, Florence and Marie. The name with the most votes will be given to the first TBM. This will weigh 2,000 tonnes and will be 170 metres long. It will be launched from a site near the M25 and will be one of two to dig the ten-mile Chiltern tunnels.

The second TBM, to be launched around a month later, will receive the second most popular name. Both will be in use for around three years.

Cecilia is named after Cecilia Payne-Gaposchkin, the Buckinghamshire-born Astronomer and Astrophysicist who became Chair of Astronomy at Harvard University in the US.

Florence is after Florence Nightingale, the founder of modern nursing who spent many years at Claydon (Buckinghamshire).

Vote for their favourite name at https://www.hs2.org.uk/tbmvoting/. Voting closes on June 5.