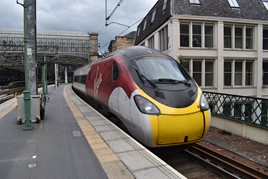 Virgin Trains has achieved a record market share of London-Glasgow traffic, with 29% of passengers between the two cities using rail in the 12 months to July this year.

And rail now accounts for 35% of journeys between Glasgow/Edinburgh and London, another record figure.

Analysis by sustainable transport charity Transform Scotland shows that the increase in rail usage has helped to cut carbon emissions on the routes. The carbon savings delivered by the modal shift from air to rail between Glasgow and London over the ten years to 2015 are said to be equivalent to taking 145,000 cars off the road for a year.

“The current level of air travel is incompatible with the Climate Emergency, so it’s heartening to hear that rail is growing its market share over air for travel between central Scotland and London,” said Transform Scotland Director Colin Howden.