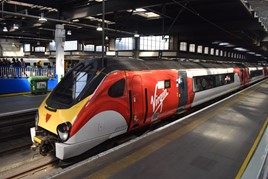 Virgin Trains has applied to run an hourly open access service between London Euston and Liverpool Lime Street, starting in May 2021.

Working with Stagecoach, SNCF and Alstom, Virgin claims the services would be “unique” in that they would be guaranteed to be 10% cheaper than equivalent tickets offered by other operators. There would also be guaranteed reservations, which VT says would eliminate overcrowding.

“These new services will allow us to take the customer experience on the UK’s railways to the next level, and show the rest of the industry how it can be done,” said VT Managing Director Phil Whittingham.

The trains would call at Nuneaton, Lichfield, Tamworth and Liverpool South Parkway. Currently VT operates an hourly service to Liverpool.

VT will use Class 91s and Mk 4s leased from Eversholt Rail. These were used by Virgin Trains East Coast, but are being withdrawn this year as Azumas are introduced on the East Coast Main Line. The trains will be shorter than the current nine-car sets, enabling faster acceleration. However, because they cannot tilt, they will be restricted to 110mph.

Virgin currently operates the Intercity West Coast franchise (which it has run since March 1997) in a 51/49 partnership with Stagecoach. Together with SNCF, the three companies were bidding for the West Coast Partnership deal until Stagecoach was disqualified (RAIL 877)