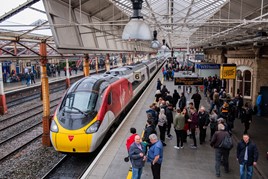 Virgin Trains could bid to operate trains in Spain, after calling the UK “uninvestable”.

A VT delegation travelled to Spain at the start of July to learn more about the country’s railways. The Spanish high-speed sector is to be liberalised from December 2020, allowing other operators to bid to run trains instead of just state operator Renfe.

Patrick McCall, Senior Partner, Virgin Group, said: “Unfortunately, the UK is fast becoming uninvestable from a rail franchise perspective, because of the UK Government’s decision to load unacceptable risk onto bidders. We welcome the liberalisation of the Spanish rail market, where we hope competition will be allowed to flourish and the best operators will be able to drive significant improvements in customer service. We are currently considering our options.”

TSSA General Secretary Manuel Cortes criticised McCall’s comments, saying: “These comments highlight the shallow thinking prevalent at Virgin and elsewhere. Virgin are the past, and won’t be missed. These comments should be a signal to the Williams Review that the future must be a nationalised railway.”