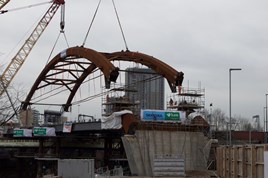 To mark the £85 million construction of Manchester’s Ordsall Chord reaching a key milestone, Network Rail has released a time lapse video of its centrepiece network arch bridge being lifted into position.

The heavy lift to lower the 600-tonne bridge into position across the River Irwell took place on February 21, in a six-hour operation performed by contractors from Skanska and Bam Nuttall operating two cranes in tandem.

The 90-metre-long asymmetrical network arch was designed by Manchester-based architect BDP, and welded together on site from individual sections fabricated by Bolton company Severfield.

It is the first bridge of its kind to be built in the UK using the network arch concept first developed in Scandinavia, which adds strength and reduces the amount of steel required by running suspender cables diagonally instead of vertically.

Once completed in December, the 300 metre Ordsall Chord will provide a direct link between Manchester’s Piccadilly and Victoria stations.

It will cut congestion at Piccadilly by 25%, and contribute to the introduction of 700 new services across the region from 2018.

Your generosity can support the work of Railway Children