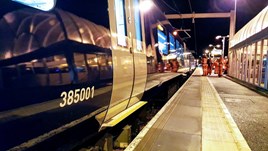 This follows a successful trial of the infrastructure between Edinburgh and Linlithgow in the early hours of October 18.

Full testing of the trains and the infrastructure along the route will continue for several weeks.

When the new trains enter passenger service they will deliver faster journeys, more seats and better services for customers travelling between Scotland’s two biggest cities, and will then be rolled out to other routes in the central belt according to the operator.

ScotRail Alliance Programmes and Transformation Director Ian McConnell, said: “This morning’s trial was a massive step towards the introduction of electric passenger trains on the newly electrified Edinburgh to Glasgow mainline. Having a train run successfully along the full route shows real progress."

Hitachi Rail Europe Programme Manager Andy Radford, said: “We are really pleased that our new trains can now be tested on the newly electrified Edinburgh to Glasgow routes. We will continue to work closely with the ScotRail Alliance to ensure the trains deliver the benefits to future passengers as soon as possible.”