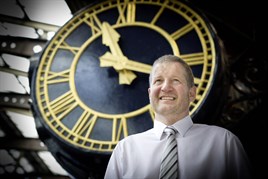 Network Rail Chief Executive Mark Carne said: “Phil has done a great job setting up the ScotRail Alliance and overseeing the delivery of one of the largest programmes of rail modernisation in Scotland since Victorian times.”

Abellio UK Managing Director Dominic Booth said: “Phil has played a key role in helping us create the ScotRail Alliance, the first time an operating company has come together in such a deep alliance with Network Rail to deliver the very best for our customers.”

Verster said: “Over the last two years I have worked with my team to launch the ScotRail Alliance, delivering hundreds of commitments and laying the ground for the exciting new train fleets that will start to arrive later this year.”

His replacement will be announced soon.

For more on this story see RAIL 819, published on February 1.