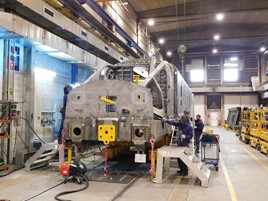 For each job created at the planned Talgo factory in Longannet in Scotland, five will be created in the supply chain, according to the Spanish manufacturer’s President Carlos de Palacio.

Speaking at the company’s Las Matas headquarters near Madrid on April 1, he said: “When we speak about establishing a factory we must also speak about the supply chain, which is more important than the actual manufacturing.

“We are integrators as much as manufacturers, and we have to be doing as much as possible in the United Kingdom. It won’t be possible to do 100%, but we must do all we can.

“Others bring in lots of parts from Italy, Japan and Germany, but we won’t do that. Parts will come from abroad, but not much.”

He added: “Talgo’s UK aim is to establish true manufacturing, rather than assembling from parts made elsewhere. This means that we will draw from materials and expertise across the UK. This keeps more money in the UK economy and creates more skilled, long-term jobs.”

Talgo spokesman John Morris added that the company is working on research and development, as well as building relationships with universities, to enable the firm to build a legacy in the UK.

The company’s UK Director Jon Veitch explained that planning work has started for the plant, telling RAIL: “The idea is to win a contract, and start construction of the factory the next day.”

He also explained that the company tests technology it plans to offer to the market before it bids for any orders, while each train undergoes one month’s static testing before delivery.