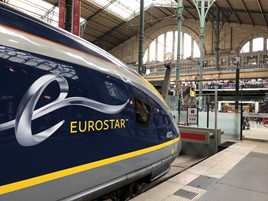 Both the UK and French governments must set out their commitment to supporting Eurostar through its current financial crisis, Transport Select Committee Chairman Huw Merriman has urged.

Concern is growing over the future of the cross-Channel operator, as passenger numbers have dropped to around 1% of their usual levels.

Merriman was speaking on January 20, after a TSC evidence session with transport officials and experts from France, Singapore and Sweden about the challenges facing their transport systems, as part of its inquiry on ‘Reforming public transport after the pandemic’.

“We simply cannot afford to lose Eurostar to this pandemic,” he said.

“The company contributes £800 million each year to the UK economy. It is unique in offering an environmentally friendly, direct connection to mainland Europe. Trips from London to Paris, Brussels and Amsterdam on the Eurostar emit between 80%-90% less greenhouse gas emissions per passenger than the equivalent short-haul flights.

“Like airlines, quarantine and travel restrictions have blighted Eurostar’s access to its markets during the pandemic. Unlike airlines, Eurostar has been shut out from government loans that have offered a lifeline. It needs a joint, bespoke UK-French solution to help it through this crisis.”

Crozet has also been working on the effects of the pandemic on all modes. He told the TSC: “If you want to keep Eurostar today, you have to give a lot of public subsidies.”

“But clearly Eurostar is a subsidiary of SNCF, and SNCF has the majority of the capital. So clearly the money will come from France in a very important part, but maybe France will ask UK to also give some hand to the system.”