Tram-train operation to continue in Sheffield as new systems proposed 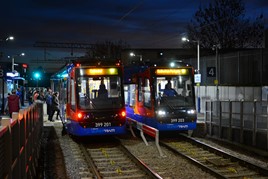 Tram-trains will continue running in South Yorkshire beyond the end of the two-year trial period, with the Government believing it could act as an inspiration for similar schemes elsewhere.

More than 1.5 million passengers have travelled on the Sheffield Supertram tram-trains that serve Rotherham Central, sharing infrastructure with Network Rail, since they began running on October 25 2018.

Rail Minister Chris Heaton-Harris claimed the scheme had transformed public connections in the region. He highlighted the £125 million Department for Transport funding in the project.

According to South Yorkshire Passenger Transport Executive (SYPTE), more than ten transport authorities want their own tram-train systems in cities including Manchester, Birmingham and Glasgow. Tram-trains are already on order for Transport for Wales, to operate into Cardiff Bay.

“Our region is leading the way for tram-train learning and application in the industry,” said SYPTE Executive Director Stephen Edwards.