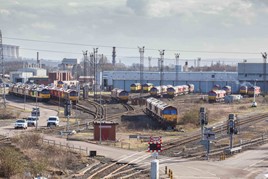 DB Cargo says the immediate future of its Toton depot has been secured, and that neither it nor the adjacent yards need to be demolished to make way for HS2.

This follows suggestions that the site would have to make way for the controversial high-speed line. The operator itself had previously hinted at this possibility last year.

However, the company has not ruled out Toton’s eventual demise. DB Cargo’s UK Chief Executive Hans-Georg Werner said: “While the site may have to move to accommodate new economic development associated with the HS2 Hub Station at some time over the next 15 to 20 years, there is time to work with all interested parties to ensure a holistic approach is taken.”

Werner said HS2 Ltd had confirmed that the land was not required for the baseline plans for the new railway, and that this was good news for DB, its staff and customers.

“Toton is one of the biggest depots in the UK and provides an extremely important service to the rail freight industry. Its future must be handled with care,” he said.