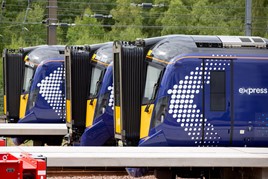 A new report written by former Transport Minister Tom Harris on the subject of Scotland’s railways rejects the idea of bringing train operations into public ownership.

Is Scotland on the Right Track?, published on August 20, suggests that moving to a concession model, rather than franchising, could retain the experience and discipline of the private sector, while acknowledging the responsibility of the government for the services a train operator provides.

The report was commissioned by Abellio, which operates the current ScotRail franchise, however its author stated it was "researched, written and managed independently. The report is explicitly written from the perspective not of train managers, company operators or politicians, but of the ordinary Scottish railway passenger."

In its recommendation on the point, the report says: “Ministers should be reluctant to dispense with the proven benefits that private sector involvement in the railway industry has brought passengers. But if change is seen as necessary due to the reduced pool of potential franchise bidders and consequent dearth of choice, and if political considerations mandate more political control over services, they should consider, as a first alternative to the status quo, moving to a concession model in Scotland.”

The report points out that passenger numbers have doubled in Scotland over the past 15 years, and that franchises have played a key part in driving that growth. Eighty per-cent of passengers surveyed for the report described their most recent rail journey as ‘excellent’ or ‘good’, with just 6% rating it as ‘poor’. However, while 45% were positive about the value for money offered by fares, 54% were not.

Asked what their top three priorities for extra spending on Scotland’s railways were, passengers gave an overall ranking of 29% for investment in more rolling stock, 28% for increased subsidy of fares and 27% for spending more money on bringing railways back into public ownership.

When it was put to respondents that the Scottish rail network prioritises the needs of its passengers, 42% said they neither agreed nor disagreed, 28% disagreed and 13% strongly disagreed.

The report also suggests that Network Rail (described by Harris as “the largest inhibitor of ScotRail’s efficiency”) should undertake a “radical reorganisation”, under which local teams would take directions from and seek to meet the aims of the locally dominant train operator (in this case ScotRail). This structure, it argues, could lead to “a genuine shift in the effectiveness of Network Rail at a local level,” and as such it should be piloted in Scotland.

Tom Harris issued a riposte to government-led specification of rolling stock too: “Those who provide passenger services are better placed than civil servants or ministers to judge what the most suitable rolling stock is for a particular service. In fact, they are better placed to judge what services need to be run and at what frequency.” However, he also acknowledges that an entirely privately-run ‘for profit’ system “would not meet the demands of passengers in a modern democratic country.”