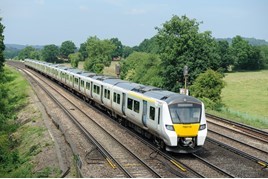 “Time simply ran out.” That was the explanation of Thameslink Industry Readiness Board (IRB) Chairman Chris Gibb, when he appeared at the Transport Select Committee inquiry on July 9 into the May timetable change fiasco.

“All of the issues on May 20 could have been dealt with, with a little bit more time,” Gibb told MPs. “I don’t think the industry understood the consequences of time running out in the way that it did.”

Gibb explained to the committee that at an IRB meeting on May 4, members were aware that Govia Thameslink Railway (GTR) drivers still had to learn the route between Blackfriars and New Cross Gate, but that: “We believed and were told all the issues presented on May 4 could have been mitigated.

“Between May 4 and May 20, that’s when time ran out. It was impossible to get enough drivers in the right places with the right skills working with the very inefficient plan that had been prepared at the very last moment when the timetable was eventually agreed. If we had had more time at any level, we would have made a better job of it as an industry.”

Gibb added that the IRB expected there would be some cancellations (in tens of numbers of services), and that nobody at the meeting disagreed with the analysis at the time.

He pointed out that there were concerns about driver availability, but that GTR had arranged a mitigation plan. In early May, driver rosters and diagrams were still at an early stage - normally, they are posted two weeks ahead.

Chris Green, chairman of the IRB’s Independent Advisory Panel (IAP), expanded on Gibb’s theme, saying: “In the early days, the timetable was the most important issue. On traincrew, by January 2018 physical works had finished. The timetable should have been finished but wasn’t.

“In February, the IAP had an all-day meeting. It was quite clear not enough drivers would be trained for May, and that was not a surprise. On a change of this scale… you can’t physically do it. The issue was how to mitigate . We were given a detailed mitigation plan. It added up and made sense, and we presented that to the IRB."