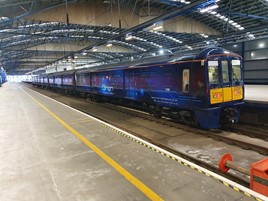 Orion High Speed Logistics hopes to be operating three routes by the end of the year.

Managing Director Paul Orchard told RAIL that the tentative plan is for commercial services to begin in July, although that relies upon there being sufficient trains available.

The three routes would likely be West Midlands-Mossend, London Gateway-London Liverpool Street, and West Midlands-South West. Orchard added that plans are for Orion to serve inland terminals as well as other destinations.

“We’ve looked away from the West Coast, Great Western and East Coast Main Lines - we use that as a starting point,” he said.

Orion is part of the Rail Operations UK Limited business. ROUK Chief Executive Karl Watts told RAIL that logistics was worth around £17 billion at a conservative estimate pre-COVID, and that demand has only increased.

Currently, only four-car 319373 is available. This is being used for demonstrations, but Orchard confirmed there are potential customers committed to requiring four-, eight- or 12-car trains.

He also said there was currently more demand for running longer trains north than south: “We are developing something similar to airlines where you book a seat. If we could get 26 pallets in a ‘769’ driving vehicle then we would - it’s a more ‘turn up and go’-style service.”

He also confirmed there have been enquiries for stops on the WCML, while a service planned for the Midlands-South West could split at Bristol Parkway.

Orion has five Class 319s being converted to Class 769 FLEX bi-mode units, with a further five confirmed. A further eight ‘319s’ are being identified for use as electric multiple units, giving the company a projected fleet of nine EMUs and ten bi-modes.