Threat to Newton Aycliffe jobs as train orders wind down 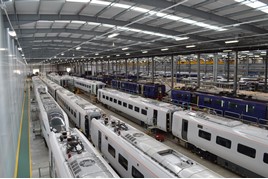 Up to 250 jobs could go at Hitachi’s £82 million Newton Aycliffe factory as the company looks to create a new core workforce model at the County Durham site.

The announcement, made on January 9, comes as assembly of the final Azumas begins. When the final set is released in May, it will complete the 122-strong Intercity Express Programme order, with the final ScotRail Class 385 having been released last autumn.

The factory opened in September 2015. The 250 jobs represents a third of the current workforce, and a 45-day consultation period is under way.

Ross Nagle, Chief Operating Officer, Hitachi Rail Manufacturing, said: “The cyclical nature of demand in the industry means the factory must be more flexible and agile to secure a long-term, sustainable future.”

Unite represents workers at the factory. Regional Officer Pat McCourt said: “These redundancies need to be laid at the door of the Government. Its existing procurement policies mean that major contracts for new trains are too readily awarded to overseas companies, depriving factories in the UK of work."

The Japanese manufacturer said it would look to relocate staff to other Hitachi sites if possible.

All are being built at Newton Aycliffe. Work begins on the EMR fleet this summer.