Thameslink’s 24tph introduction held over to 2019 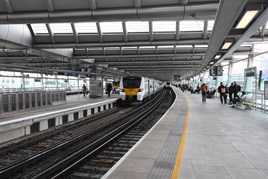 Govia Thameslink Railway will introduce the full 24 trains per hour through the central London ‘core’ between St Pancras International and Blackfriars, as part of the £6 billion Thameslink programme, in December 2019, and not December 2018 as planned.

The decision has been taken following an independent review into the plans. It is designed to reduce the risk of delays being introduced into the national network on May 20 2018, when the largest national timetable change takes place.

GTR and Network Rail were both ready for the December 2018 launch, but a series of meetings involving stakeholders has led to the decision to mitigate potential risk created by the introduction of new trains on new routes with new drivers and new frequencies.

However, GTR will start running some trains on routes earlier than planned. Speaking exclusively to RAIL on November 15, Chris Gibb, chairman of the Thameslink Programme Industry Readiness Board, said that as soon as drivers were trained, GTR services would be diverted via London Bridge from January instead of May, and via the Canal Tunnels from April.

He said the former diversion would offer savings of eight minutes on Thameslink trains, enable drivers based north of the river Thames to learn the route, and create extra capacity for Southern’s Metro services.

“By phasing the introduction of the new timetable in this way, we have front-loaded the benefits for passengers and then spread further changes in such a way that they can be more reliably introduced,” he added.