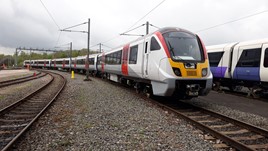 The first Greater Anglia Class 720 has moved to the Old Dalby test track.

Bombardier is building 89 five-car and 22 ten-car electric multiple units at Derby Litchurch Lane. The first should have moved to Ilford in January, but delays to the Aventra programme caused by the Train Control Management System meant that ‘720s’ could not start testing until the similar ‘710s’ with London Overground were authorised for passenger use (RAIL 880).