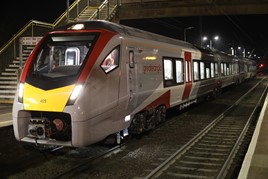 The first Stadler bi-mode unit for Greater Anglia made its main line debut in the early hours of  December 15, when it ran between Diss and Trowse Junction (near Norwich).

Crewed by Rail Operations Group, four-car 755405 reached speeds of 100mph on diesel power. So far the BMU is not certified yet to operate on electric power.

The ‘755’ was hauled from Norwich to Diss by ROG 37601, which was used as a standby locomotive for the tests.

GA says the BMUs will enter traffic from the summer, although it hopes to put the first four-car sets into traffic in May.