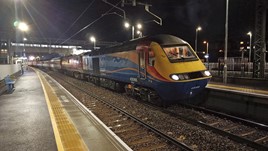 Wires have been erected from Bedford-Corby/Kettering. It’s planned that electric trains should start running north of Bedford from next May, although Rail Minister Chris Heaton-Harris has previously suggested that trains could start running earlier once the testing is complete.

Initial testing has been mechanical, running between Bedford, Kettering and Corby.

Network Rail spokeswoman Kathryn Muffett explained that this involves running with the first pantograph in the train raised at speed, and running under the OLE, although the electric locomotive is not under power.

She said this was a key achievement for the project because it meant the full suite of mechanical testing had been completed (as planned) at speeds up to 110mph.