Test run carried out as part of £160m Shotts electrification 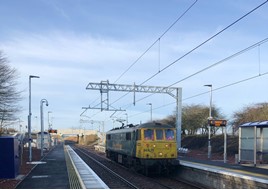 The first electric train ran along the Shotts Line between Holytown and Midcalder Junction on February 24.

Freightliner 86638 was used to carry out test runs, and was later joined by classmate 86627.

The 22.2-mile section of railway is being wired in a £160 million scheme, and becomes the fifth electrified route between Edinburgh and Glasgow. ScotRail expects to start running electric-operated passenger trains from the start of the May timetable using brand new Hitachi Class 385s.

Network Rail said 1.2 million hours work has involved installing 2,500 tonnes of steel masts on the route, while 17 bridges have either been raised or demolished to create space for the overhead wires. The project has taken four years to complete, with NR expected to complete the upgrade by the end of this month.