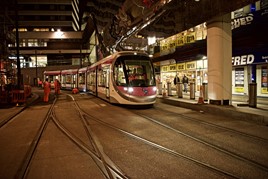 Transport for the West Midlands has launched a tendering process for new battery-powered trams.

TfWM already operates one battery-powered tram, but is now looking to add 18 new trams to its fleet with the option to purchase 32 more in the future.

It plans to use the new trams on a number of proposed extensions to the network. TfWM said the battery technology will remove the need to have overhead wires, making it easier to construct various sections of the new routes.

It said it is looking for a supplier with “tried and tested tram fleets in operation elsewhere in the world”. A supplier is expected to be confirmed by May next year, with TfWM hoping the new trams will be operation by summer 2021.

Roger Lawrence, West Midlands Combined Authority portfolio holder for transport and leader of the City of Wolverhampton Council, said: “The West Midlands is leading the way on sustainable public transport in this country. We launched the UK’s first battery-powered tram earlier this year, and now we’re adding more to the network. We had to wait for the technology to catch up with our ambition - so we will retro-fit all our existing trams with batteries.”

He added: “Eventually, this tender could treble the amount of trams operating on our network, potentially increasing our regional fleet from 21 to 71 trams, meaning more services and more stops as we extend the tram network for passengers across the West Midlands.”