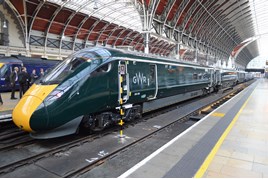 The operator had aimed for the 0600 Bristol Temple Meads-London Paddington to be the first train, but this target was threatened by a fault with the Train Management System relating to couplings.

Indeed, with 40 minutes to go a High Speed Train was readied to cover the duties (ironically, the HSTs are being replaced by the IEP trains). In the end, 26 minutes later than planned, 800006 led 800005 away from Bristol Temple Meads.

However, two coaches from 800006 then suffered HVAC (heating, ventilation and air-conditioning) failures. Water leaked onto passengers, and temperatures rose in Coach K, where Secretary of State for Transport Chris Grayling was travelling.

The train then came to a stand at Taplow following a pantograph failure, and then went forward under diesel power. When it arrived at Paddington, the two ‘800s’ were removed from traffic. GWR told RAIL that Agility Trains would not be paid for that day (the contract stipulates Agility is paid when IEP is available). A further two IEP sets, 800008/009, remained in traffic on a different diagram.