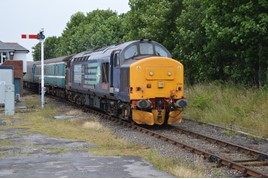 Discussions regarding the reliability of locomotive-hauled trains on the Cumbrian Coast are ongoing, with no decision made as to their replacements.

There had been suggestions that Direct Rail Services would supply top-and-tail Class 68s to replace the Class 37/4s on the route. The ‘37s’ operate in push-pull mode with Driving Brake Standard Opens, but there have been several failures, caused by both the locomotive and the DBSO.

DRS is contracted to supply Northern with two sets of locomotives and coaches until January 6 2019, the deal having started in 2015 as part of a Department for Transport-funded scheme to cover for a cascade in diesel multiple units (RAIL 767).

DRS spokesman Rachael Storey told RAIL: “We are looking at a range of solutions in partnership with Northern to improve the performance of the service.”

Northern spokesman Glyn Hallam said: “Talks are ongoing at the moment to look at the issues, but no decision has been made at this stage.”