Talgo targets benefits for the UK 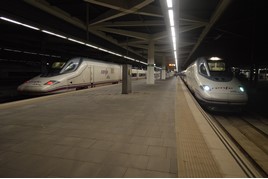 Spanish manufacturer Talgo promises to “regenerate the UK industrial base”, should it be successful in the HS2 trains bidding process.

The company is currently evaluating several sites and plans to make an announcement shortly.

Welcoming its inclusion on the revised list of shortlisted companies, Key Account Manager UK & Ireland Jon Veitch said: “We have committed to opening a factory in the UK if we win this history-changing contract. Talgo recognises the significant, serious and growing encouragement and support that it continues to receive from members of UK, Scottish and Welsh governments, parliaments and assembly.”
The company exclusively told RAIL last year of its plans to build a facility in the UK, and Veitch has held discussions with leading politicians in Scotland and Wales, as well as in Westminster. He said Talgo was determined that up to 1,000 jobs would be created, with significant apprenticeship, training and educational opportunities.

Of the HS2 deal, he said: “Talgo intends to provide the fastest, most environmentally friendly and most comfortable trains at the best value for money.”