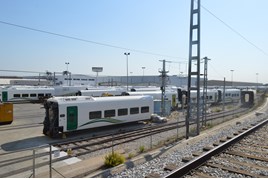 Spanish train manufacturer Talgo has been meeting representatives from major UK cities and regions, following its declaration of aiming to build a factory in the country (RAIL 836).

Key Account Manager for the UK and Ireland Jon Veitch told RAIL that the company was meeting leading figures from Liverpool and Leeds, and that constructive meetings had also been held with those tasked with bringing investment to Scotland. Wales is another area keen to talk to Talgo, he said.

Meetings have been lined up with other regions, while Talgo is also keen to explore what is available in Ireland. Rolling stock leasing companies, financiers and franchise bidders have also been keen to meet Talgo, Veitch told RAIL on October 11.

While the company has a pedigree in high-speed trains, and is examining those opportunities, Veitch confirmed that all franchises were being explored for train needs.

No deadline has been set for the company to set up its base in the UK, but Veitch said the plan was to continue learning what the market wants, and how it can be served by the Spanish manufacturer.

Veitch said that the company was investing in the UK, and was looking at markets away from train building, including refurbishment and maintenance.