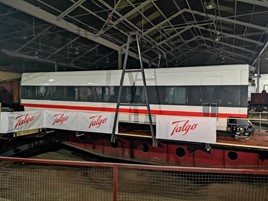 “I hope that it is not long before we see the next generation of Talgo’s products built in the UK,” the company’s President Carlos de Palacio announced at the handover of a vehicle to Chesterfield Borough Council on January 28.

The Spanish train manufacturer has bid for the classic compatible order for HS2 (RAIL 881) and is interested in other potential UK deals as well as export opportunities.

It has permission to build a factory at Longannet, Fife, and has set up its UK headquarters at Barrow Hill. Chesterfield will also be home to a Research and Development facility, which the sleeper vehicle will form part of.

The sleeper vehicle had previously been used on overnight Paris-Madrid trains, with other coaches from those services being converted into Very High Speed Train vehicles for use in Spain.

de Palacio said: “I am delighted to deliver a high-speed present from Spain today. This is part of Talgo’s plan to generate better understanding of Talgo’s technologies that are being used around the world, but which have so far eluded the UK.

“Talgo’s strategy of ‘true manufacturing’ - and not relying on brainpower or kits of parts from elsewhere - requires that innovation and Research and Development takes place in the host country."