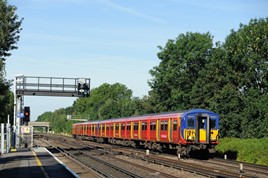 Ticket offices at stations run by South Western Railway are being closed for days - or even whole weeks - in succession because of a shortage of staff.

The company says it is recruiting more staff, but this process will take months. The result is that some smaller stations that are normally staffed are left without any employees either in the ticket office or on the platform.

An SWR staff member supplied RAIL with a detailed breakdown of every ticket office closure from October to shortly before Christmas.

Worst hit has been Micheldever, in Hampshire, which has been closed entirely for five of the past eight weeks, and for at least three days in each of the remaining weeks. The ticket office should be open during every morning rush hour.

Other ticket offices which have been closed for entire weeks this autumn include St Denys (for five weeks), Swaythling, Hedge End and Parkstone.

Other stations are frequently closing early, often from mid-morning for the rest of the day. These even include some larger stations, such as Farnborough Main, Eastleigh and Southampton Airport Parkway, as well as Woolston, Netley, Swanwick, Brockenhurst, Lymington Town and Dorchester South.

The result, in some cases, is passengers have been unable to buy tickets before boarding trains. As tickets are unchecked during many journeys, this means passengers arrive at a gateline on larger stations such as Southampton Central or Bournemouth with no proof of journey origin.

SWR told RAIL: “We know that recent changes in our station management teams have left the new South region temporarily short of relief staff. We are now in the process of recruiting new posts to address this."