Surplus Class 185s could yet be retained 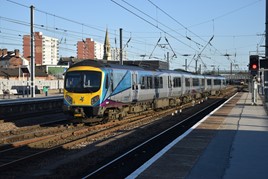 Once all its new fleets are introduced, TransPennine Express is due to return 22 three-car Class 185 diesel multiple units to Eversholt Rail Group.

However, TPE could yet retain them long-term. Following the awarding of the East Midlands franchise to Abellio, the Department for Transport announced that the Nottingham-Liverpool section of the Norwich-Liverpool route could be split, with Transport for the North to decide whether Northern or TPE would operate it from the end of 2021.