Success of HS1 a blueprint for HS2 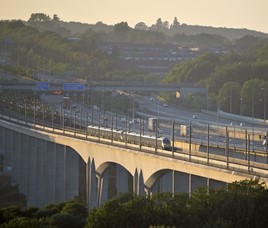 High Speed 1 provides a blueprint for the successful implementation of HS2, says a report from the High Speed Rail Group.

The High Speed Rail: London and South East Voices report adds that as the southern starting point for the new railway’s construction, London will play a key role in ensuring the future success of the project.

A range of contributors point out the success of HS1 and the potential benefits of HS2.

Ashford MP Damian Green said of HS1’s impact on his area: “The arrival of the domestic and international high-speed services has undoubtedly been the most significant factor in making the town attractive to inward investment for half a century.”

Meanwhile, Visit Kent Chief Executive Deirdre Wells claimed HS1 has “played a major role in our region’s growth, improving connectivity and opening up Kent more than ever before”.

Regeneration is also covered in the report. Heather Johnson, who chairs Camden Council’s Planning Committee, said: “Railways don’t operate in isolation, they connect places, and as such places create communities. It is my belief that high-speed rail is at its most successful when the community is viewed as an essential part of its development.”