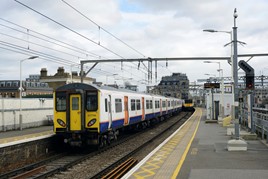 Eight ex-London Overground trains that are almost 40 years old and which have been stored for many months are being returned to traffic by Greater Anglia, as they are more accessible than some of its current fleet.

The eight Class 317/7s were removed from traffic earlier this year, having been replaced on LO’s West Anglia Inner routes by Bombardier Class 710s. They were sent for warm storage at Wembley Yard, where they were still able to be powered by overhead wires.

Ongoing delays to the delivery of Bombardier Class 720s has forced GA to look for trains that still do not meet the full PRM-TSI (Persons with Reduced Mobility - Technical Specifications for Interoperability) regulations that came into force on January 1, but which are nevertheless more compliant than the units they will replace.

The rules state that all trains must provide access for wheelchair users, that the size and location of internal fittings such as handrails should be easy to use for all passengers, and that passenger information systems as well as external appliances such as door sounders should be fitted.

More than 1,500 vehicles around the country missed the December 31 2019 deadline, although the Department for Transport granted derogations for trains to continue in traffic for specific periods.

Letters published in late October by the DfT revealed further extensions for existing GA Class 317s to May 30 2021, as well as the addition of the former LO sets.

GA spokesman Jonathan Denby told RAIL that using the ‘317/7s’ was “a sensible way of making as much progress as is practically possible as quickly as we can, ahead of the issues all being resolved as the new trains roll out continues, and then all completed in 2022”.