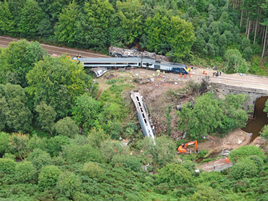 Britain lost its record 13-year period without a passenger death in a rail accident on August 12, when ScotRail’s 0638 Aberdeen-Glasgow Queen Street derailed on a landslip near Carmont.

In the immediate aftermath of the accident, Alex Hynes, managing director, Scotland’s Railway, said: “Our thoughts are with those who have been affected by this tragic event, particularly the families of those who have lost their lives. The railway in Scotland is often referred to as a family, and it’s one that is hurting today.”

The accident followed torrential early morning rain that triggered widespread flooding across Scotland’s tracks, including south of Carmont. The train was an HST formed of two power cars and four coaches, with only nine passengers and staff on board.

It had turned back at Carmont because its route south was blocked, and was returning north towards Stonehaven. It struck debris from the left-hand cutting side as it rounded a right-hand curve and, around 100 yards later, the train crossed a bridge over the Carron Water (Bridge 325), demolishing the left-hand parapet and piling up just yards beyond after the power car rolled to its left down a bank, tearing its cab off.

A week later, as this issue of RAIL closed for press, Network Rail was planning how to recover the wreckage and repair the line. Spokesman Kevin Groves said it might be a month before the line reopened.

A fire started in the leading power car, partially engulfing one coach, and it was the smoke from this fire that prompted a call to the police at around 0945. Meanwhile, a conductor travelling to duty on the train walked the mile or so back to Carmont signal box to alert the signaller.

These alerts triggered a major response from the emergency services, who faced a difficult situation with the wreckage hard to reach. Scottish Transport Minister Michael Matheson said the next day, after meeting fire, police and ambulance staff, that 18 fire appliances attended. HM Coastguard sent helicopters to the scene.

Matheson added: “I think it would be reasonable to presume, without unduly speculating, that weather had an impact in this particular incident.”

Aerial photographs taken after the accident show a small landslip just south of Bridge 325. This is a point that the train had passed at around 0700 on its initial journey south. 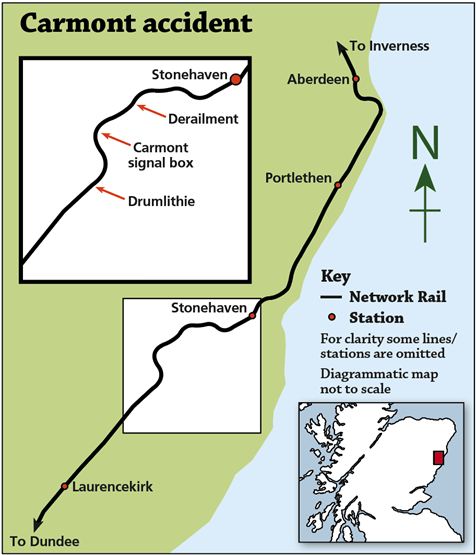 0659: The driver of ScotRail’s 0639 Montrose-Inverurie alerts Carmont signal box to a landslip between Drumlithie and Carmont.

0700: Carmont signaller calls the 0638 HST’s driver to stop his train before the landslip. The train stops three-quarters of a mile south of Carmont and returns ‘wrong direction’ to Carmont.

0715: Signaller makes arrangements for the 0638 HST to return to Stonehaven. This includes having an NR mobile operations manager drive by road to Carmont to clip 11 Points, to allow the 0638 HST to cross from the southbound to the northbound line (Up to Down).

0936: The 0638 HST enters the section to Stonehaven (that is, leaves Carmont heading north).

Groves then said there was a call to Police Scotland at 0945, and at the same time a call from Stonehaven signal box to Carmont signal box to say the 0638 HST was on fire. He said NR did not know who made this call or how they knew the train was on fire.

With a distance of 1¼ miles from 11 Points to the derailment, a line speed of 75mph and a falling gradient of 1-in-102, Groves said NR’s best estimate was that the derailment took place at around 0940.

The accident follows a general increase in severe weather and failures of cutting and embankment sides across Network Rail’s routes.