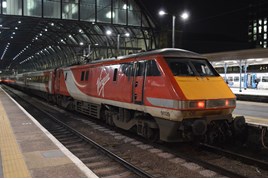 Stagecoach Group is negotiating the terms of its Inter-City East Coast franchise with the Department for Transport (DfT) due to uncertainty over planned infrastructure upgrades on the East Coast Main Line (ECML) and lower than anticipated revenue and profits compared with the original franchise bid.

The announcement was made in the company’s preliminary full-year results for the year ended April 29, issued on June 28. Stagecoach says it expects to “finalise new commercial terms during the next year.” It adds that it expects to operate the franchise until at least 2023 and that from 2019 it will “have the potential to earn a profit margin commensurate with that of a direct award franchise.”

However, Stagecoach warns that Virgin Trains East Coast is expected to incur losses under the current contract, and in its full year results recorded a pre-tax charge of £84.1m to reflect “that the current contractual arrangements give rise to an onerous contract.”

The Department for Transport refused to comment on specific aspects of the negotiations, but RAIL understands they are taking place. Spokesman Hywel Barrett said: “We monitor all franchises and are in constant discussion with train operators over performance of their contractual obligations. We expect Stagecoach to honour its financial commitments, but we are unable to comment on the specific details of individual franchise agreements.”