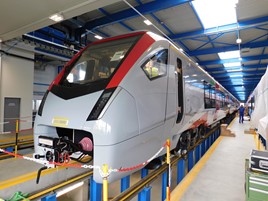 Stadler is targeting more business in the UK, with upcoming franchises providing opportunities for the Swiss train manufacturer. The company is also investigating providing alternative power for its trains.

Speaking in Bussnang on May 3, before the unveiling of the first Class 755/4 bi-mode unit for Greater Anglia (see separate news story and feature), Stadler UK Marketing Director Ralf Warwel said that there were “quite a few activities” the company was looking at, suggesting East Midlands and maybe the West Coast Partnership.

The company is also keen to supply locomotives (possibly Class 68s) for the CrossCountry and Chiltern Railways franchises, where potential bidders have investigated the Class 68/Mk 5A concept about to be introduced by TransPennine Express.

Stadler is also interested in the Invitation to Tender issued by Direct Rail Services last year for ten diesel-electric locomotives, to be delivered next year.

Warwel said that the company was looking at all the products available, adding: “We are looking at alternative energy. It is too early to see technical details. Diesel is very good, but batteries are probably the furthest advanced for alternative power. Batteries are something that has the potential to be good, but technology moves so fast. Batteries need recharging, so more work is needed.”