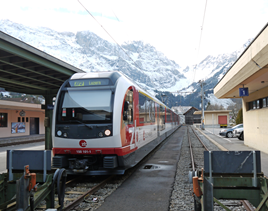 How did a small family company specialising in bespoke trains for narrow gauge and mountain railways become one of the fastest growing and most innovative train builders in Europe in less than 20 years?

In a world dominated by the three global giants - Alstom, Bombardier and Siemens - Stadler Rail has become a serious player, competing for major orders from incumbent national operators. But it is also taking advantage of the trends towards regionalisation and open access operation to win smaller orders for its railcars, light rail vehicles and multiple units.

In the mid-1990s Stadler employed only around 100 people, but since the turn of the century it has grown rapidly - today the total is more than 7,000 employees over 20 countries worldwide, producing hundreds of rail vehicles, trams, locomotives and coaches per year, managing maintenance contracts and refurbishment programmes, and supporting operators across Europe, the USA and the Middle East-North Africa region.

Peter Jenelten, Executive Vice-President for Marketing and Sales, and Ralf Warwel, Director of UK Sales, are leading Stadler’s UK programme. Although it is still early days for the company in this country, it is moving swiftly to set up a permanent presence and to design the trains it will build for British operators. Like any successful company, Stadler has taken advantage of changing market conditions, but it has also benefited from being in the right place at the right time, capitalising on dissatisfaction with the ‘big three’ to win large orders.

Alstom, Bombardier and Siemens have all experienced extensive delays in recent years, both in the design and construction of new trains and in getting them approved for use on European railways - most notably in Germany.

However, Stadler prides itself on being extremely accurate on delivery deadlines and on being able to deliver new trains at short notice when required. A recent example was the debut of a section of the new EC250 ‘Giruno’ train for Swiss Federal Railways, at Innotrans in September 2016. Stadler’s first high-speed train was rolled out in Berlin just 23 months after the contract was signed.

How is the company able to do what others have failed to achieve, and deliver new trains so quickly?

Jenelten explains: “We have a well-motivated team across the group - teams at all levels work together to develop ‘best in class’ vehicles for our operators. It’s essential to analyse the customer’s specification and try to give the best solution.

“Another advantage we have is that we’re a family-owned company - our owner is also the Group CEO, and we can make decisions very quickly. Time to market for products is an important selling point, and you can achieve short timescales if you have a lean organisation and structure.”

What has drawn Stadler to the UK market, and why now?

“It’s a long story,” laughs Jenelten. “The UK is the country of railways, but it’s also very demanding. Companies need to have the production capacity and engineering resources needed to deliver big orders quickly, and to handle all the requirements.

“I worked for Adtranz in the 1990s. We worked with Brush Traction on two major orders for the Eurotunnel shuttle locomotives and the Class 92s. The ‘92s’ were an interesting case because we signed contracts with SNCF and BR, but a couple of months later BR disappeared. We were the first to go through all the new processes for homologation, dealing with new organisations, and this process was very, very demanding.

“For many years afterwards I said to our owner, Peter Spuhler, that we needed to grow and gain more experience before we could enter the UK market. Two years ago we saw that there were a lot of new projects coming through, so we started to look at what we could offer in the UK.”

The company places great faith in its ability to deliver trains that work reliably ‘out of the box’ - something that will be vital if Stadler is to meet the ambitious target of having its first FLIRT UK trains running in the UK in 2019. How important is this to the company’s culture?

“Ask our customers around Europe and we have an image of being reliable, not only in the reliability of our trains but in delivery of our contracts.” says Jenelten.

“We deliver on time and to the right quality. We have an excellent track record and the railway community knows it - that has been essential to the success we’ve had. We also try to base our products on existing experience, and don’t jump into taking risks which we cannot manage later.

“Our first UK contract was the extra trams for Croydon Tramlink. This required a very short delivery time , and we were the only people who could fulfil this. We have to analyse areas where we have an advantage or can meet the certain peculiarities of an order.