Springburn Works to close next year 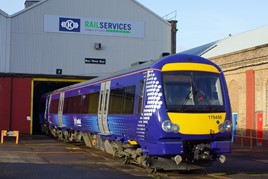 Springburn Works, near Glasgow, will close in March 2020 its owners Gemini Rail Services confirmed on March 6.
GRS blamed the introduction of new trains for the closure, claiming that its core workload was ex-British Rail rolling stock, and that by 2024 the number in traffic would drop from 6,648 now to 1,407.

A spokesman said: “The company will proceed with a gradual closure programme completing existing projects before our final exit in March 2020. Gemini will continue to work with the Scottish Government and stakeholders over the site’s future use, including the possibility of a transport hub.”
GRS said its aware of the impact this will have on the 180 staff affected, and has raised the opportunity of enhanced redundancy packages. The company hopes to agree terms with union and staff representatives.

Unite had launched a campaign to save the works when a 45-day consultation into its future was announced by GRS. Questions regarding its future were also asked in Westminster, with suggestions it could be electrified and used to maintain ScotRail trains to release the burden on other facilities. The cost of the wiring was predicted to be under £1 million, but this has not been progressed.

Trains serving Cleethorpes will be cancelled over the weekend of September 25-26 to enable vital footbridge work.