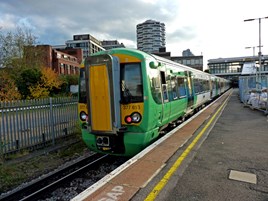 ASLEF drivers have accepted a proposed resolution to the long-running dispute with Southern Railways.

ASLEF General Secretary Mick Whelan said: “Our members on Southern, after careful consideration and long and hard negotiations, have voted to accept this resolution to our industrial dispute with the company. We are pleased with a resolution which, we believe, works for the staff and the company, and we now look forward to working with Southern Rail to restore good industrial relations and deliver the service passengers in the region deserve.
“The agreement means we will have a second safety-trained person on every train covered by this agreement except in exceptional circumstances. That person will have all the relevant safety competence - including the skills to evacuate passengers in an emergency.

“The agreement also confirms the terms and conditions under which our members at Southern are employed.

ASLEF said the resolution accepted applies only to Southern and that operator.

Whelan added: “It’s important to stress that this deal is company-specific, and does not have implications for any other train operating company on Britain’s railway network.”

Govia Thameslink Railway Chief Operating Officer Nick Brown said: “This dispute has been difficult for our passengers in particular, and we are pleased that we can now move ahead and deliver stability by finally concluding this deal with ASLEF.

“Our trains will be planned to have a second person on board, and this has been the arrangement we have operated over the last year. More on-train staff are on more trains with more passengers than ever before. The on-board service concept has been welcomed by our passengers across the board.

“Should, in certain circumstances, a train not have that second person on board then it will still be able to run until a replacement can be provided. Avoiding cancellations is key to us delivering a resilient and reliable service across the busiest and most congested part of the UK rail network.”

“Where once such passengers who required assistance were guaranteed a second member of staff to assist, a new clause in this deal deliberately sets out how, where there is no on-board supervisor, the driver will knowingly have to leave such passengers stranded on trains and stations. That is frankly appalling.”