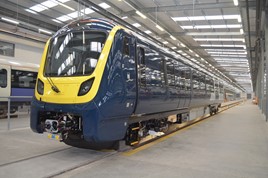 The first of Bombardier’s new £895 million Aventra Class 701 fleet for South Western Railway has been unveiled at Derby Litchurch Lane.

The electric multiple units had been contracted to start carrying passengers from next month, but the first ‘701’ has not yet been delivered for testing. With thousands of testing miles required, and hundreds of drivers needing training, entry into traffic has been put back to mid-2020.

The trains will operate on SWR’s suburban network from Waterloo across south west London as far as Guildford, and on the Reading and Windsor lines in Berkshire.

Ninety trains, comprising 750 vehicles (60 ten-car and 30 five-car), are to be completed over the following 12 months, instead of the 17-month programme originally agreed.

The trains lie at the heart of two years of strikes by guards in the RMT union. There have been 38 strike days so far, with a further 27-day stoppage scheduled for almost the whole of December.

Like all Aventras, the SWR fleet is designed for Driver Controlled Operation (DCO). However, the RMT continues to insist that guards operate the doors instead, on safety grounds.