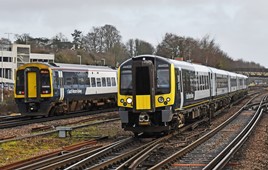 South Western Railway has informed staff that its current contract could be terminated, with operation of services handed back to the Government.

Commenting on poor financial figures, the company wrote to employees stating that it continues to have discussions with the Department for Transport about rewriting its contract. These discussions have been continuing for a year without reaching a conclusion.

On only his second day as Managing Director at SWR, Mark Hopwood wrote to staff: “We are having constructive talks with the DfT as regards a new contract. Another potential outcome is that the current contract will end. If this happens, the business will keep operating, just under a Government-controlled body. It doesn’t affect our plans to improve services for passengers in 2020 and beyond.”

It is the first time the First MTR-owned company has admitted the franchise could fail.

Hopwood, who steered Great Western through a decade of modernisation, electrification and fleet renewal, has been brought in to replace Andy Mellors, who had led SWR since it replaced Stagecoach in 2017. He started his new role on January 6, promising to “drive through change and make a positive impact”.