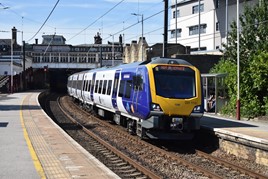 Class 331s are now working on the Skipton/Ilkley-Leeds (via Bradford) route and between Blackpool North and Liverpool Lime Street.

These are the first new routes for the £500 million fleet since their introduction on July 1 (RAIL 883), when the electrics started work on Leeds-Doncaster services, and the diesels on the Liverpool-Manchester Airport, Windermere branch and Windermere-Manchester Airport routes.

At an event at Blackpool North on August 30, Northern launched the EMUs for the Lancashire resort. Three will be needed to operate all trains to Liverpool, while ‘331s’ will also operate between Blackpool and Hazel Grove via Bolton by the end of the year.

Transport Minister (and Blackpool North and Cleveleys MP) Paul Maynard said: “The rollout of new, modern trains across the Northern network is a landmark moment in delivering better journeys for passengers. We want to see significant improvements in performance across the North to get trains running on time.”