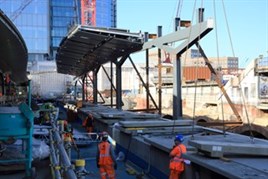 Up to 750,000 passenger journeys will be affected daily, as Network Rail continues to rebuild London Bridge station as part of the £6.5 billion Thameslink programme.

And from December 22 until December 24, some Southeastern trains will not call at the station in the morning peak.

The changes will allow more than 1,200 Network Rail engineers to work safely around the clock, even on Christmas Day, to open two new platforms and modernise nearby track and signalling equipment that has been in use since the 1970s.

From January 12 2015, Platforms 5 and 6, which are used by GTR and Southeastern, will be taken out of use. This will allow engineers to start working on the new tracks and platforms, to eventually create space for more trains than ever before to run through central London.

Until August 2016, Southeastern Charing Cross services will not call at London Bridge, and some trains will be diverted to alternative London terminals. GTR will be left with a reduced service at other platforms to and from Brighton.

Simon Blanchflower, Thameslink programme director, said: “Our work here will improve the journeys of millions of passengers across the South, but we understand that until we’ve finished some people may have to change their journey to or from London.”