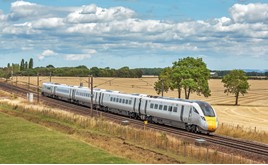 Testing of Class 800/801 Azumas on electric power north of York has been halted because the trains interfere with signalling.

Network Rail declined to comment on whether this will have an impact on LNER’s plans to introduce the Hitachi-built trains on the East Coast Main Line in December, saying it was a matter for the operator and the Department for Transport. Currently, training is being carried out largely between York, Peterborough and London King’s Cross.

RAIL understands that the trains intermittently interfere with a certain type of signalling, and that meetings have been held between Hitachi, NR and DfT regarding the possible impact on the planned launch in December, when Class 800/801s are due to be introduced on Leeds/Hull-London King’s Cross trains.

The trains have been unable to operate north of York using the overhead lines since August 1. Problems have been found between Colton Junction (south of York, where the ECML and Leeds line diverge) and Drem.

Hitachi’s Global CEO - Rail, Alistair Dormer said that the issue was similar to that around the introduction of Class 390s on the West Coast Main Line, and that he was confident a solution would be found in time within “a couple of weeks”. He added that the Azumas were not actually due to enter traffic north of York until next spring.

An NR spokesman told RAIL: “We are working closely with Hitachi on finding a remedy to some technical issues that have arisen with the interference between their trains and the infrastructure.