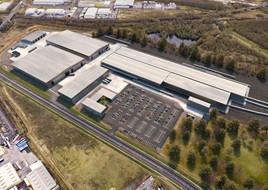 Impressions of the £200 million Siemens factory at Goole have been released after more plans were submitted to East Riding of Yorkshire Council.

The planning application provides specific details of the layout, scale, appearance and landscaping of the facility, which could be open in 2023. Outline planning consent was granted in July last year.

Approval is needed for 55,000 square metres of manufacturing, assembly, warehouse, testing and offices; the plan is to deliver this in two phases.

The first phase will enable the construction of the £1.6 billion Piccadilly Line train order for London Underground.  The second phase would depend upon future contract wins; the site has been phased to enable the first part to operate in isolation.

Construction could begin by early summer. It’s planned up to 700 jobs will be created, as well as a further 250 during construction. Through the potential UK supply chain a further 1,700 jobs could be created.