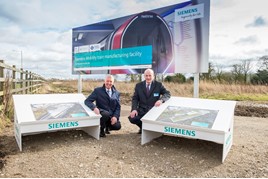 The first jobs at Siemens Mobility’s Goole train building factory have been announced as 12 apprenticeships.

Applications are now open for the three-year Level 3 Rail Engineering Technician Apprenticeship positions, which will start in September this year.

Apprentices will spend their first year at college, while in the second year they will spend one day a week there and four on placement at Siemens Mobility Traincare facilities. In their final year they will work full-time at Goole for six months, followed by a six-month placement at the company’s train factory in Vienna.

The Goole facility will build new trains for London Underground. It is expected to create 700 jobs, plus a further 250 during construction and an additional 1,700 in the wider supply chain.

Siemens Mobility Chief Executive William Wilson said: “We are delighted to announce we will be taking on our first apprentices for the pioneering Goole rail manufacturing development in September, and that applications are now open.

“This will provide a fantastic opportunity for 12 aspiring engineers to launch their careers with us and become among the first members of the team at Goole when the facility becomes operational."

The Rail Accelerator and Innovation Solutions hub for Enterprise (RaisE) has been officially opened in Goole.