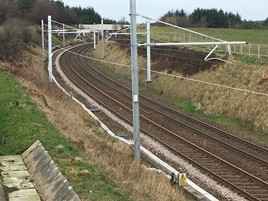 Electrification of the Shotts line in Scotland has been completed on time and on budget.

A four-car Class 385 became the first electric multiple unit to operate along the line on April 3, when it operated the 2231 Corkerhill-Edinburgh Waverley and 0220 return. EMUs will begin running from the start of the May timetable.

The project cost £160 million, with funding provided by the Scottish Government, and means there are now five electrified routes between Edinburgh and Glasgow.

Network Rail (NR) says the route adds resilience and capacity into the railway to cater for projected growth in passenger numbers from towns such as Livingston and West Calder into Edinburgh and Cleland and Shotts into Glasgow. NR also says it will enable freight growth.

NR has installed 1,400 masts to carry 138.5 miles of overhead wires. Seventeen bridges were modified including the demolition of some and some rebuilt to create space for the wires. Nine stations have been upgraded or undergone platform extensions, while Breich and Livingston South were completely redeveloped.