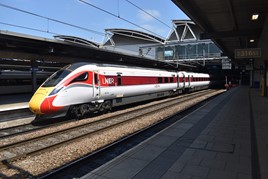 Class 801/1 Azumas will make their passenger debut on September 16, when a pair is introduced on the London King’s Cross-Leeds route.

From August 1 there were expected to be seven nine-car Class 800/1 Azumas in daily passenger traffic, the maximum available, LNER Managing Director David Horne told RAIL on July 31. LNER has 12 five-car Class 801/1 electric multiple units on order, with all 12 released for testing and commissioning.

A fifth pair will be used for driver training and also coupling and uncoupling tests. LNER Engineering Director John Doughty said those tests have not yet happened, but most of that was to be carried out at London King’s Cross, with five-car trains used on off-peak Lincoln services. It will be rare to see a five-car set by itself on other routes, he added.