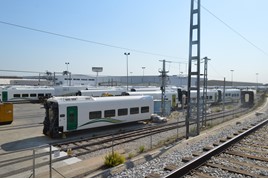 Two Scottish locations have been confirmed by Spanish train builder Talgo as potential sites for a UK facility.

The company has already confirmed sites near Chesterfield, St Helens and Leeds have been shortlisted for England as well as Mostyn in North Wales, but it has added Longannet and Hunterston as potential sites. A final decision is expected next month.

Talgo has been shortlisted to build the 54 classic compatible trains for High Speed 2 (HS2) in a £2.75bn deal, while it is also interested in the East Midlands and West Coast Partnership deals. The firm was also looking to bid for new trains for the CrossCountry franchise until that competition was stopped following the announcement of rail review in September.

At a launch event in Cardiff this morning, the firm told RAIL that it was looking at manufacturing trains for other parts of the world, including Africa, Australia and Canada.

However, the site must win a contract for the UK first.

The company says it aims to enter the UK train market through what it calls ‘true manufacturing’. It said in a statement: “instead of assembling kits of parts from overseas, it wants to source components from within the United Kingdom.”

Talgo President Carlos de Palacio said: “The establishment of a manufacturing facility in the UK is a significant part of Talgo’s future strategy.”