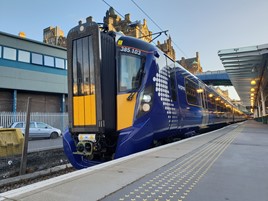 Hynes acknowledged that the East Coast Main Line would need work to increase its capacity, as more operators plan trains to and from Scotland.

This includes TransPennine Express, which plans to extend trains beyond Newcastle to Edinburgh, and First, which is planning an open access operation between London and Edinburgh. In addition, Transport Scotland is looking to open new stations in East Lothian at Reston and East Linton, which Hynes acknowledged would need services.

Hynes said that signalling east of Edinburgh Waverley was due to be renewed in Control Period 6 (2019-24), and that this work would need co-ordinating with other work to upgrade track and overhead power capacity.

He explained that Transport Scotland was putting Network Rail under pressure to develop business cases for schemes that it could then fund.