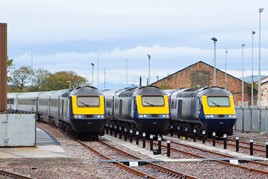 ScotRail plans to have around 12 Inter7City High Speed Trains in traffic by the end of the year, running alongside seven ‘Classic’ sets.

The operator should by now have 26 IC7s in traffic (all were due by last December), but various delays during conversion at Wabtec Rail, Doncaster, means the final set will be delivered some two years later than planned.

There are currently seven IC7 sets with ScotRail, with an eighth due for imminent release. Previously, SR was hoping for one set per month to be released.