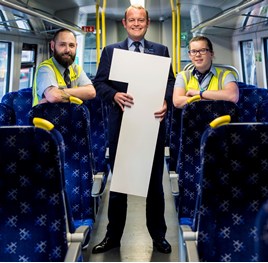 ScotRail claims it is the best-performing large train operator in the UK, following the release of Public Performance Measure (PPM) figures in August.

Its Moving Annual Average for the year to August 19 was 90.9%, while in the four-week period to August 19, 92.5% of trains met the PPM - the best performance for the period in five years.

Both figures are ahead of the performance improvement plan target of 90.5%, and the ScotRail Alliance says this is better than other large operators.

ScotRail Alliance Managing Director Alex Hynes said: “The fact that we are the best-performing large operator in the UK is down to the hard work of our people in the ScotRail Alliance - a partnership between Abellio ScotRail and Network Rail.

“But we aren’t complacent. We’re working hard to build the best railway Scotland’s ever had. Our new and better trains will deliver faster journeys, more seats, and better services for our customers.”